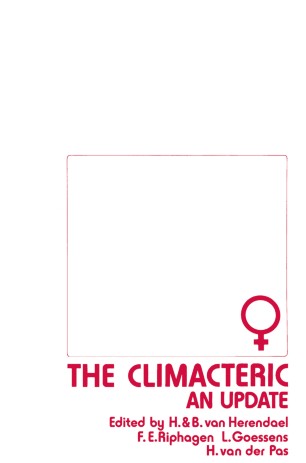 The Climacteric: An Update

Proceedings of the fourth Jan Palfijn Symposium, European Conference on the Menopause, held in Antwerp, Belgium, on September 1–2, 1983, under the auspices of ‘De Vereniging voor Nederlandstalige gynecologen van België’ and ‘The International Menopause Society’

THE JAN PALFIJN SYMPOSIA In 1979 the Department of Obstetrics and Gynaecology of the Jan Palfijn Hospital in Merksem, Antwerp, celebrated its 25th Anniver­ sary. To mark the occasion, the first symposium was organized, the theme chosen being hysteroscopy. Thanks to the cooperation of specialists from both within and outside Belgium the event attracted such a large attendance that it was decided to follow up this first venture with others. In the light of the experience gained from the first symposium, we established the Jan Palfijn Foundation for Gynaecological and Obstetrical Didactics, the reasons for this being budgetary and, in particular, organizational. This approach made it possible to attract the cooperation of enthusiastic fellow workers from outside the hospital on a permanent or ad hoc basis and hence to reach a much wider group of experts in all fields, both at home and abroad. In 1981 the second symposium was held at the Jan Palfijn Hospital, the topic being echography in obstetrics and gynaecology. Almost all of the Belgian universities were represented and papers were presented by confreres from practically all of the EEC countries. When the third symposium was held, in 1982, again on hysteroscopy, the speakers and audience could literally hardly be squeezed into the Jan Palfijn Hospital's facilities. The fourth symposium was accordingly organized in the modern, luxurious facilities of the new administration building of the Antwerp Provincial Authority.