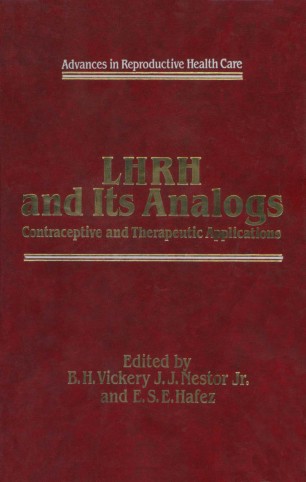 LHRH and Its Analogs

A. CORBIN Investigations on LHRH and its analogs have just completed their first decade. We have witnessed a veritable explosion of chemical, physiologic and pharmacologic data on this hypothalamic peptide and the approximately 1500 agonist and antagonist analogs that have been synthesized. In order to track this expanding field, I was asked to organize an international symposium on basic and clinical aspects of LHRH analogs as part of the Reproductive Health Care: CDS Symposium held in Maui, Hawaii, in October 1982. This meeting brought together a number of the leading investigators in the field. Much new state-of-the-art information was presented which I and my colleagues felt deserved a wider audience. Drs Vickery, Nestor, and Hafez consented to undertake this task. Upon review of the literature, it was apparent that there was no recent text which fully covered the breadth of developments in the field. Accordingly, the editors decided to use the symposium as a nucleus on which to build a singular, comprehensive state-of-the-art analysis of this rapidly growing discipline, and the application of such knowledge to reproductive medicine. As exemplified by the various areas of expertise provided by the individual contributors, it becomes obvious that the scope of the subject matter, while relating solely to a well-defined chemical class (LHRH analogs) and a circumscribed physiologic and pharmacologic entity (reproduction), has expanded enormously.