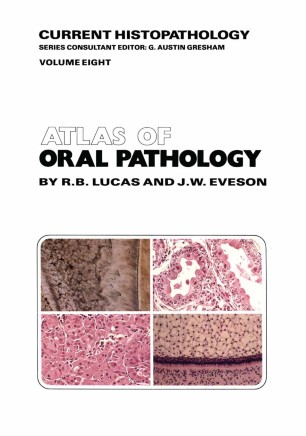 This Atlas of Oral PathologV is intended primarily as a ances where appropriate and reproduce relevant radio­ graphs. Every pathologist who deals with bone specimens bench companion for the general diagnostic pathologist. especially the trainee. It has not been designed to cover will know the value of radiographs, and some indeed are the subject fully and in detail, nor does it enter into the reluctantto make a diagnosis in their absence. In addition, radiographs may give a good idea of the extent aFld other more theoretical aspects. Since the book is essentially an atlas the text has been features of a lesion that may be represented in the first kept to a minimum, but in it we have tried to adopt'a instance only by a small biopsy specimen. practical approach, with special regard to differential diag­ While many of the illustrations have been made from nosis. We have made some remarks about the clinical sections freshly cut and stained for the purpose, others features of the various conditions dealt with, since this have been prepared from stained sections already in our may help the pathologist to appreciate what is in the refer­ files and since, in addition, the material comes principally ring clinician's mind in an area with which the pathologist from two departments, as well as from outside sources, may not be particularly familiar.