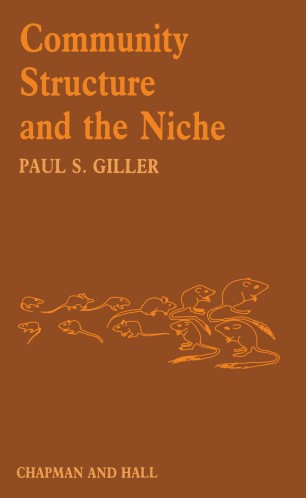 Community Structure and the Niche

During the past two decades, there has been a gradual change of emphasis in ecological studies directed at unravelling the complexity of natural communities. Initially, the population approach was used, where interest lay in the way individual populations change and in the identification of factors af­ fecting these changes. A good understanding of the dynamics of single populations is now emerging, but this has not been a very fruitful approach at the community level. In the natural world, few species can be treated as isolated populations, as most single species are the interacting parts of multispecies systems. This has led to a community approach, involving the study of interrelationships between species within com­ munities and investigation of the actual organization of natural communities as a whole. The formalization of a number of new concepts and ideas has evolved from this approach, including niche theory, resource allocation, guild structure, limiting similarity, niche width and overlap etc. , which, until fairly recently, have been examined mainly from a theoretical point of view. However, a wealth of field data is gradually being added to the literature, especially from the general areas of island biogeography and resource partitioning amongst closely related species. Community structure embodies patterns of resource allocation and spatial and temporal abundance of species of the community, as well a. '1 community level properties such as trophic levels, succession, nutrient cycling etc.