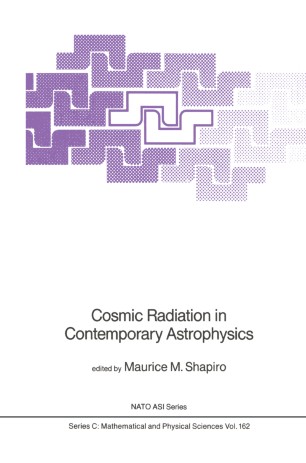 This volume is the product of Lecturers in the fourth Course of the International School of Cosmic-Ray Astrophysics held at the Ettore Majorana Center in Erice, Sicily in November, 1984. The Course, devoted to "Cosmic Radiation in Contemporary Astrophysics," was concurrently a NATO-sponsored Advanced Study Institute (ASI). Cosmic-ray research is in a state of ferment. Precise measure­ ments - some made with instruments aboard sattelites and space probe- have been confronting models and theories with severe constraints. The observations of gamma-ray sources, notably Cyg X-3, at energies up to 16 10 eV, have opened up tantalizing possibilities of direct source iden­ tification. This ASI was devoted largely to interdisciplinary phenomena in cosmic-ray astrophysics whose understanding requires input from the other channels in astronomy. It explored the ways in which progress in cosmic-ray science might clarify phenomena observed in related disciplines. In trying to achieve this aim, we assembled a staff of lecturers representing various astrophysical specialties, such as radio­ astronomy, optical astronomy, X-ray astronomy, gamma-ray astronomy, and of course, particle astronomy (i.e., cosmic radiation). Students and other participants were likewise drawn from diverse backgrounds. Vigorous discussions enlivened almost every session.