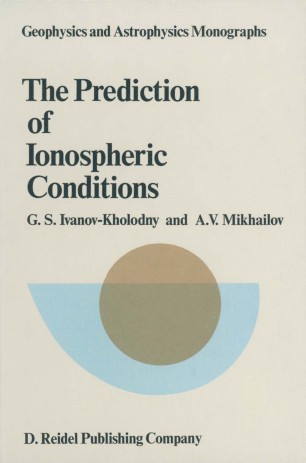 The Prediction of Ionospheric Conditions

The ionosphere of the Earth has been actively studied since the 1920's, following the discovery of ground radio-sounding. By means of this method results were ohtained by an international network of ionospheric stations, in particular, by the successful implementation of a number of rigorously planned international scientific research programs,'" enabling the collection of extensive experimental material on some of the most important parameters of the ionosphere - the critical freLjuencies of E-, Fl­ and F2-layers. Comprehensive analyses of these observation data give a fairly complete picture of the various changes taking place in the principal ionospheric layers at different points on our globe. Another important aspect of the study of the ionosphere, which has been in progress for the past three decades, is an extensive program of in situ determinations of the various physical parameters - first using rockets, and subsequently artificial satellites. The data thus obtained on the principal ionizing agent - short-wave solar radiation - and on the physical conditions prevailing in the upper atmosphere and in the ionosphere at different altitudes, allow the proposal of a self-consistent mechanism of ionosphere formation. A general outline of the theory of ionosphere formation at different altitudes is now complete. Its application to specific cases, dependent on a more accurate determination of input parameters to give solutions valid for a definite set of conditions etc., is yet to be accomplished. The use of artificial satellites in cosmic research yielded abundant scientific data.