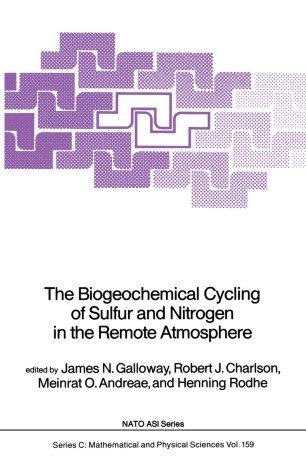 The Biogeochemical Cycling of Sulfur and Nitrogen in the Remote Atmosphere

Viewed from space, the Earth appears as a globe without a beginning or an end. Encompassing the globe is the atmosphere with its three phases-­ gaseous, liquid, and solid--moving in directions influenced by sunlight, gravity, and rotation. The chemical compositions of these phases are determined by biogeochemical cycles. Over the past hundred years, the processes governing the rates and reactions in the atmospheric biogeochemical cycles have typically been studied in regions where scientists lived. Hence, as time has gone by, the advances in our knowledge of atmospheric chemical cycles in remote areas have lagged substantially behind those for more populated areas. Not only are the data less abundant, they are also scattered. Therefore, we felt a workshop would be an excellent mechanism to assess the state­ of-knowledge of the atmospheric cycles of sulfur and nitrogen in remote areas and to make recommendations for future research. Thus, a NATO Advanced Research Workshop '~he Biogeochemical Cycling of Sulfur and Nitrogen in the Remote Atmosphere" was held at the Bermuda Biological Station, St. Georges, Bermuda, from 8-12 October 1984. The workshop was attended by 24 international scientists known for their work in atmospheric cycling in remote areas. This volume contains the back­ ground papers and the discussions resulting from that workshop. The workshop was organized along the lines of the atmospheric cycle. There were working groups on emission, transport, transformation, and deposi­ tion.