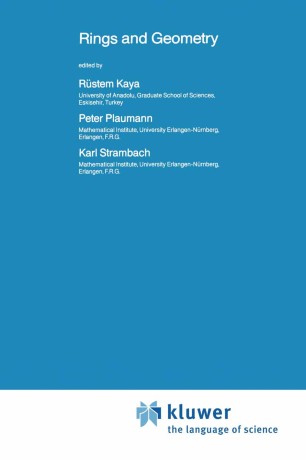 When looking for applications of ring theory in geometry, one first thinks of algebraic geometry, which sometimes may even be interpreted as the concrete side of commutative algebra. However, this highly de­ veloped branch of mathematics has been dealt with in a variety of mono­ graphs, so that - in spite of its technical complexity - it can be regarded as relatively well accessible. While in the last 120 years algebraic geometry has again and again attracted concentrated interes- which right now has reached a peak once more - , the numerous other applications of ring theory in geometry have not been assembled in a textbook and are scattered in many papers throughout the literature, which makes it hard for them to emerge from the shadow of the brilliant theory of algebraic geometry. It is the aim of these proceedings to give a unifying presentation of those geometrical applications of ring theo~y outside of algebraic geometry, and to show that they offer a considerable wealth of beauti­ ful ideas, too. Furthermore it becomes apparent that there are natural connections to many branches of modern mathematics, e. g. to the theory of (algebraic) groups and of Jordan algebras, and to combinatorics. To make these remarks more precise, we will now give a description of the contents. In the first chapter, an approach towards a theory of non-commutative algebraic geometry is attempted from two different points of view.