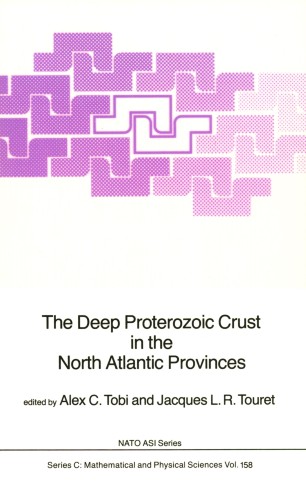 The Deep Proterozoic Crust in the North Atlantic Provinces

The Proterozoic terrains of South Scandinavia and the Grenville Province in North-America have many common features : Regional high­ grade metamorphism (Granulite-facies), anorthosites, etc. They are separated by the Caledonian orogeny and, above all, by the Atlantic Ocean. During the time of the great continental drift controversy, few people were ready to admit that both sides on the Atlantic were once an unique province. Now everybody agrees on the Post-paleozoic age of the Atlantic and, consequently, on the intrinsic homogeneity of the much older. rocks which occur around it. But a detailed comparison is not easy. The Grenville Province is much larger than South Scandinavia, both regions have been investigated by a great number of different schools, using various methods, approaches and concepts. After several attempts, and long discussion, it was felt by a small group of individuals, that literature study would not be enough and that nothing could re­ place the direct contact, in the field, of specialists who had a first­ hand knowledge of all involved regions. The formula of a NATO Advanced Study Institute, which gives a unique opportunity to meet and mix people of various origin and levels, came almost by itself. Much work was needed, much help has been obtained, as detailed in the "Acknowledgements".