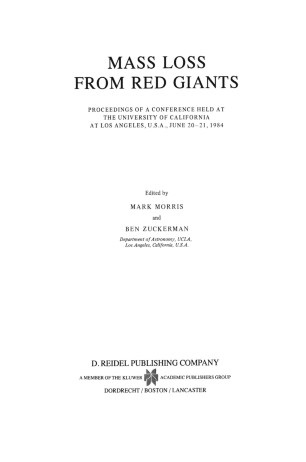 Proceedings of a Conference held at the University of California at Los Angeles, U.S.A., June 20–21, 1984

Red giant and supergiant stars have long been favorites of professional 6 and amateur astronomers. These enormous stars emit up to 10 times more energy than the Sun and, so, are easy to study. Some of them, specifically the pulsating long-period variables, significantly change their size, brightness, and color within about a year, a time scale of interest to a single human being. Some aspects of the study of red giant stars are similar to the study of pre-main-sequence stars. For example, optical astronomy gives us a tantalizing glimpse of star forming regions but to really investi­ gate young stars and protostars requires infrared and radio astronomy. The same is true of post-main-sequence stars that are losing mass. Optical astronomers can measure the atomic component of winds from red giant stars that are undergoing mass loss at modest rates 6 (M $ 10- M9/yr.). But to see dust grains and molecules properly, 5 especially in stars with truly large mass loss rates, ~ 10- M9/yr, one requires IR and radio astronomy. As this stage of copious mass loss only lasts for ~105 years one might be tempted to ask, "who cares?".