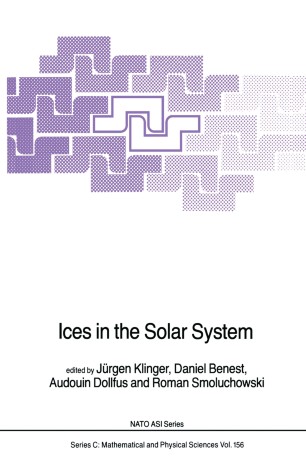 Ices in the Solar System

Audouin Dollfus Observatoire de Paris, Section de Meudon, 92195 Meudon, FRfu~CE The North Atlantic Treaty Organization (NATO) and, in particular, its Department of Scientific Affairs headed by Dr. C. Sinclair, actively supports new fields of science. The recent exploration of the outer parts of the Solar System by spacecraft focused the attention of a large community of scientists on the problem of ices, which playa major role in the accretionary processes in space except for the close neighborhood of the Sun and of other stars. NATO responded to this new interest by agreeing to sponsor an Advanced Research Workshop "Ices in the Solar System", provided a proper organizing body could be set up. It was a pleasure to organize such a workshop jointly with Profes­ sor Roman Smoluchowski who had earlier organized similar conferences. I knew from the experience of others who managed such meetings in the past that there would be much work, but the opportunity of cooperating with Smoluchowski was very attractive and convinced me to agree. If well organized, the whole project promised to be more than rewarding for a large community of scientists, both in the short run and in the long run, by clarifying certain outstanding questions in astrophysics. It became clear that a well-organized international conference would attract top scientists and help unravel many fundamental problems.