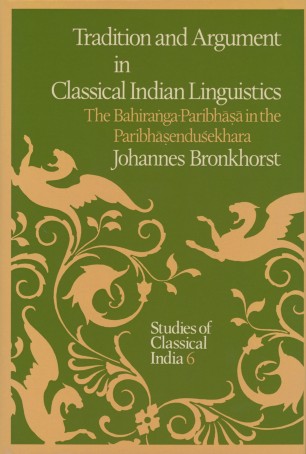 This book was written as a doctoral thesis. It was submitted to and accepted by the University of Poona in 1979. Several people contributed to the creation of this book, in various ways. Prof. S. D. Joshi, my supervisor, introduced me to the study of the Sanskrit grammatical tradition. His unfailing skepticism towards and disagreement with the ideas worked out in this book contributed more to their development than he may have been aware. Prof. Paul Kiparsky gave encouragement when this was badly needed. In the years following 1979 Dr. Dominik Wujastyk was kind enough to read the manuscript and suggest improvements in language and style. To all of these lowe a debt of gratitude, but most of all lowe such a debt to Pandit Shivarama Krishna Shastri. In the course of several years he read with me many portions of Nagesa's grammatical and other works, and much besides. His ability to understand difficult grammatical and philosophical texts in Sanskrit was unequalled, and without his help it would have taken far longer to write this book and indeed might very well have proved impossible. Shivarama Krishna Shastri never saw the result of our reading; he died before this book could appear in print. I dedicate it to his memory. J. BRONKHORST Xl INTRODUCTION In the following pages an attempt will be made to establish that the part of Nagesa's Paribha$endusekhara (PS) which deals with Par.