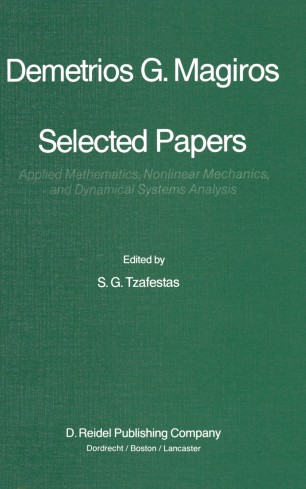 The theory of nonlinear oscillations and stability of motion is a fundamental part of the study of numerous real world phenomena. These phenomena, particularly auto-oscillations of the first and second kind, capture, para­ metric, subharmonic and ultraharmonic resonance, asymptotic behavior and orbits' stability, constitute the core of problems treated in "Nonlinear Mechanics", and their study is connected with the names of H. Poincare, A. M. Lyapunov, N. M. Krylov and N. N. Bogolyubov. Professor Demetrios Magiros, a widely known scientist in the theories of oscillations and nonlinear differential equations, has devoted his numerous works to this significant part of modern physical science. His scientific results can be classified in the following way: I) creation of methods of analysis of subharmonic resonances under the nonlinear effect, 2) determination and analysis of the main modes of nonlinear oscillations on the basis of infinite determinants, 3) analysis of problems of celestial mechanics, 4) classification of stability of solutions of dynamic systems concepts, 5) mathematical analogs of physical and social systems. He has developed new methods and solutions for a great number of difficult problems of nonlinear mechanics making a significant contri­ bution to the theory and applications of the field. Urgency, depth of perception of the considered phenomena, and practi­ cal directness are characteristics of his work.