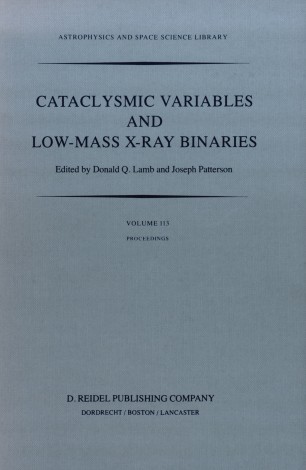 Since 1976 a meeting devoted to recent research on cataclysmic variables ("CV workshop") has been held annually somewhere in North America. Many of the meetings have been held - following a custom older than anyone reading this book - in locations with well-known recreational potential (e. g. Santa Cruz, CA; Boulder, CO). We thought hard about this custom while contemplating the possibility of organi­ zing a meeting in Massachusetts in the middle of winter. Nobody wants their meeting to go down in history as the smallest and dullest, and it ~ surely be the coldest. But on occasion, meeting organizers have defied custom and scheduled meetings for less~than-trendy places, and gotten away with it (Ur·bana, IL and Rochester, NY must be reckoned as examples of this). Encouraged by the spatial and temporal proximity of the American Astronomical Society meeting (Boston, January 9-12), we thought we might get away with it again, and so came to organize a meeting for January 12-15, 1983, in Cambridge, MA. There was another reason for a meeting at this time and place, we loftily proclaimed in early mailings. No one doubts that the CV's are closely related to the low-mass X-ray binaries ("LMXB' s"), in which the accreting star is usually, or perhaps always, more compact than a white dwarf. Many of the general characteristics of LMXB's sound pretty familiar to any student of CV's: orbital periods in the range 0.