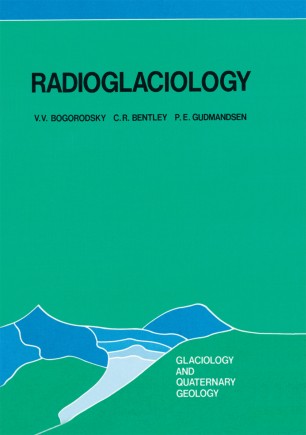 Antarctica, the sixth continent, was discovered more than 160 years ago. Since then this large, mysterious continent of ice and penguins has attracted world interest. Scientific expeditions from various countries have begun to study the geographical and natural conditions of the icy continent. Systematic and comprehensive inves­ tigations in the Antarctic started in the middle of our century. In 1956 the First Soviet Antarctic Expedition headed to the coast of Antarctica. Their program included studies of the atmosphere, hydrosphere and cryosphere. Thirty years have since passed. Scientists have unveiled many secrets of Antarctica: significant geophysical processes have been investigated, and a large body of new information on the Antarctic weather, Southern Ocean hydrology and Antarctic glaciers has been obtained. We can now claim that the horizons of polar geo­ physics, oceanology, and particularly glaciology, have expanded. Scientific inves­ tigators have obtained new information about all Antarctic regions and thus have created the opportunity to use the Antarctic in the interests of mankind.