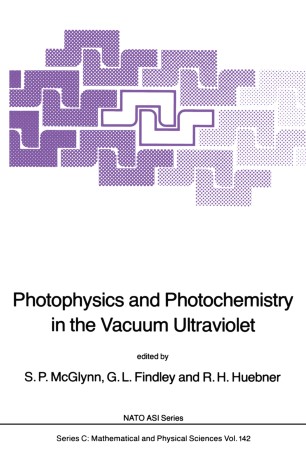 Photophysics and Photochemistry in the Vacuum Ultraviolet

This volume contains the texts of the Invited Lectures pre­ sented at the NATO Advanced Study Institute PHOTOPHYSICS AND PHOTOCHEMISTRY IN THE VACUUM ULTRAVIOLET, which was held at the Interlaken Lodge in Lake Geneva, Wisconsin USA, August 15-28, 1982. This ASI was the third in a series of NATO Institutes de­ voted to a study of the physical and chemical transformations undergone by atoms and molecules after absorption of high-energy (VUV < 6 eV) radiation. [The previous Institutes were CHEMICAL SPECTROSCOPY AND PHOTOCHEMISTRY IN THE VACUUM ULTRAVIOLET (Val Morin, Canada, 1973) and HIGH-ENERGY CHEMICAL SPECTROSCOPY AND PHOTOCHEMISTRY (Breukelen, The Netherlands, 1976). ] The purpose of this ASI was to provide a forum for the ex­ change of attitudes and viewpoints between physicists and chem­ ists working in the VUV area. This area represents one of the most fertile regions for chemistry/physics interfacing, yet the chemists remain largely unaware of the fact that the physicists have implicitly solved many of the chemists' problems (and vice versa); and the physicists remain largely unaware of the nature of the chemists' problems (and vice versa). Consequently, a major aim of the Institute was to construct a proper Chemistry/ Physics Interface, to familiarize each group with the techniques, both experimental and theoretical, of the other group, and to bring the major successes and failures of each group, within the VUV area, to light. The above stipUlations concerning the Institute also serve as desiderata for the present volume.