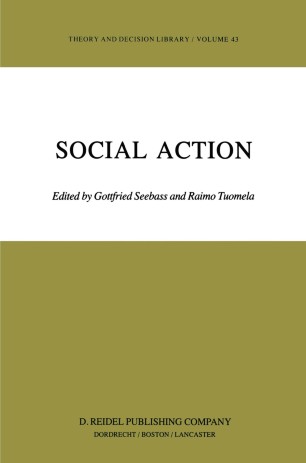 The papers contained in this volume are based on the contributions to an international, interdisciplinary Symposium entitled 'Analytical and Sociologi­ cal Action Theories' which took place in Berlin (West) on September 1-3, 1982. Each part comprises a main paper followed by two (in Part IV three) papers commenting on it. On the whole there is an equal division into philo­ sophical and sociological papers. In particular each main paper receives both inter- and innerdisciplinary comments. The Berlin Symposium was supported by the Deutsche Forschungsgemeinschaft (Bonn) and, to a smaller extent, by the Freie UniversiHit Berlin; both grants are acknowledged gratefully. Berlin and Helsinki, May 1984 GOTTFRIED SEEBASS RAIMO TUOMELA vii GOTTFRIED SEEBASS INTRODUCTION I. It is a striking fact that the extended efforts of both sociologists and analytical philosophers to work out what is termed a 'theory of action' have taken little, if any, account of each other. Yet of the various reasons for this that come to mind none appears to be such as to foil any hopes for fruitful interdisciplinary exchange. Being concerned, apparently, with the same set of phenomena, viz. individual and social actions, the two theories can reasonably be expected to be partially overlapping as well as competitive and complementary. Accordingly each can eventually be shown by the other to need completion or revision. Whether or to what extent this is the case is subject to inquiry and discussion.