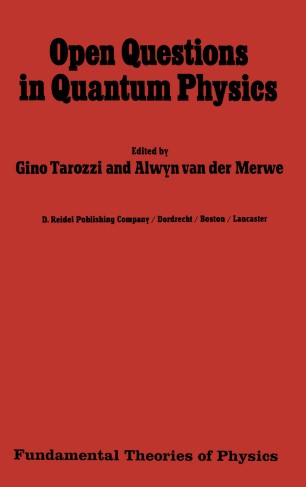 Invited Papers on the Foundations of Microphysics

Due to its extraordinary predictive power and the great generality of its mathematical structure, quantum theory is able, at least in principle, to describe all the microscopic and macroscopic properties of the physical world, from the subatomic to the cosmological level. Nevertheless, ever since the Copen­ hagen and Gottingen schools in 1927 gave it the definitive formu­ lation, now commonly known as the orthodox interpretation, the theory has suffered from very serious logical and epistemologi­ cal problems. These shortcomings were immediately pointed out by some of the principal founders themselves of quantum theory, to wit, Planck, Einstein, Ehrenfest, Schrodinger, and de Broglie, and by the philosopher Karl Popper, who assumed a position of radical criticism with regard to the standard formulation of the theory. The aim of the participants in the workshop on Open Questions in Quantum Physics, which was held in Bari (Italy), in the Department of Physics of the University, during May 1983 and whose Proceedings are collected in the present volume, accord­ ingly was to discuss the formal, the physical and the epistemo­ logical difficulties of quantum theory in the light of recent crucial developments and to propose some possible resolutions of three basic conceptual dilemmas, which are posed respectively ~: (a) the physical developments of the Einstein-Podolsky-Rosen argument and Bell's theorem, i. e.