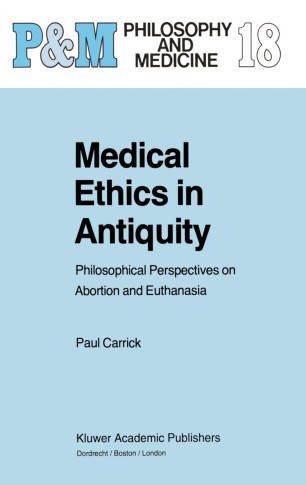 Philosophical Perspectives on Abortion and Euthanasia

Part of the Philosophy and Medicine book series (PHME, volume 18)

The idea of reviewing the ethical concerns of ancient medicine with an eye as to how they might instruct us about the extremely lively disputes of our own contemporary medicine is such a natural one that it surprises us to real­ ize how very slow we have been to pursue it in a sustained way_ Ideologues have often seized on the very name of Hippocrates to close off debate about such matters as abortion and euthanasia - as if by appeal to a well-known and sacred authority that no informed person would care or dare to oppose_ And yet, beneath the polite fakery of such reference, we have deprived our­ selves of a familiarity with the genuinely 'unsimple' variety of Greek and Roman reflections on the great questions of medical ethics. The fascination of recovering those views surely depends on one stunning truism at least: humans sicken and die; they must be cared for by those who are socially endorsed to specialize in the task; and the changes in the rounds of human life are so much the same from ancient times to our own that the disputes and agreements of the past are remarkably similar to those of our own.