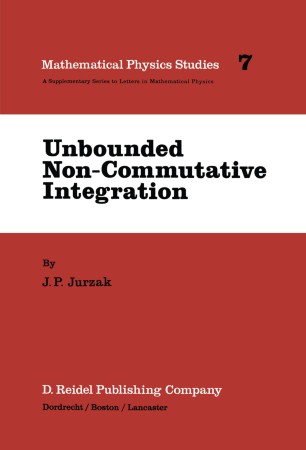 Non-commutative integration has its origin in the classical papers of Murray and von Neumann on rings of operators, and was introduced because of unsolved problems in unitary group representations and the elucidation of various aspects of quantum-mechanical formalism, together with formal calculus in such operator rings. These papers emphasized the interest in 1I -factors and pOinted out the remarkable behavior and 1 algebraic structure of the set of all unbounded closed operators a. ffiliated to such rings. The absence of power tools in functional analysis - mainly settled in their definitive form by A. Grothendieck around 1950-195- together with the pathological manipulation of algebraic operations on closed operators in Hilbert spaces, has limited ring-theory to the study of algebras of bounded operators with the main objective the difficult question of classifica­ tion up to isomorphisms of factors. This material has permitted a rigorous study of discrete systems in statistical mechanics but appears to be less convincing in other domains of physics (in the algebraic approach to field theory, for example). The striking role of Hamiltonians, Schrodinger operators and Lie group invariant properties in such areas of physics disappears in the so­ called C*-approach.