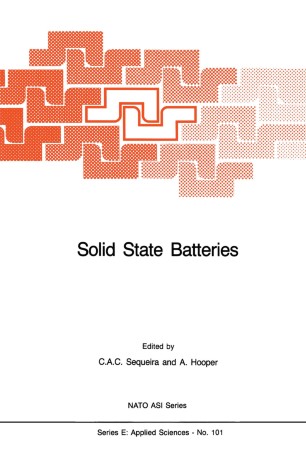 The holding of an Advanced Study Institute on the topic of "Solid­ State Batteries" at this time represented a logical progression in a series of NATO-sponsored events. Summer Schools at Belgerati, Italy in 1972 and Ajaccio, Corsica in 1975 on the topic of "Solid­ -State IOllics" dealt with fundamental aspects of solid-state electro­ chemistry and materials science. The application of specific solid ionic conductors played a significant role in the Science Committee Institute on "Materials for Advanced Batteries" held at Aussois, France in 1979. Interest in these and related fields has grown substantially over this period, and is sustained today. Research and development programmes exist within universities, governmental research laboratories and industry, worldwide and a series of international conferences and collaborations have been set up. Advanced batteries, both secondary and primary, have a potentially important role ~o play in the development of many areas of tech­ nology in the late 20th century and beyond. Applications include stationary storage, vehicle traction and remote power sources, as well as industrial and domestic cordless products and consumer and military electronics. The concept of an all-so lid-state battery is not new but, until recently, their performance has precluded their use in other than specialist low power, primary, applications. Recent materials' developments, however, make the solid-state battery a real possibility in all of the application sectors mentioned above. Further, such cells offer many attractive features over alternative present-day and advanced systems.