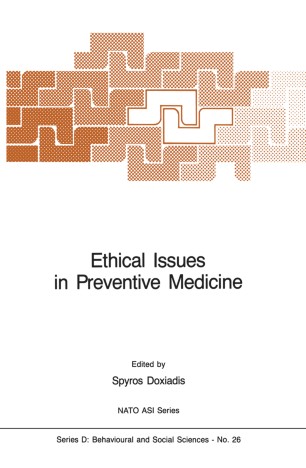 The first suggestions and exchange of ideas for this Workshop began about two years ago when, at the invitation of Professor E Bennett, Director of Health and Safety of the Commission of the European Communities and Professor W W Holland of the Panel of Social Medicine and Epidemiology of the EEC, I asked the Panel to sponsor a project for the study of Ethical Issues in Preventive Medicine. The Panel gave its approval and support and asked Dr L Karhausen, Dr R Blaney, and me to undertake the planning. Since then we have had several meetings in Brussels and have added Professor Heleen Terborgh-Dupuis and Mrs Susie Stewart to our small planning team. The Planning Committee invited many experts to collaborate with us on the project and, as can be seen from the list of participants, they represent many scientific disciplines and many countries. About a year ago we also asked for the help and sponsorship of the NATO Science Council which was generously given. The culmination of our efforts was the Workshop held in Athens in January 1985, the proceedings of which are contained in the present book. The members of the Planning Committee and the participants at the Workshop would like to express thanks to Mr H Durand, Secretary General for NATO Scientific Affairs and Dr M di Lullo, Programme Director of N A TO Scientific Affairs and to Professor Bennett and Professor Holland for all the moral and financial support they have given to this project.