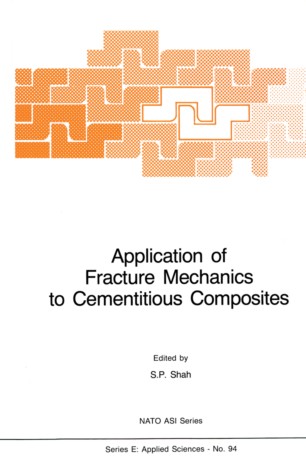 Portland cement concrete is a relatively brittle material. As a result, mechanical behavior of concrete, conventionally reinforced concrete, prestressed concrete, and fiber reinforced concrete is critically influenced by crack propagation. It is, thus, not surprising that attempts are being made to apply the concepts of fracture mechanics to quantify the resistance to cracking in cementious composites. The field of fracture mechanics originated in the 1920's with A. A. Griffith's work on fracture of brittle materials such as glass. Its most significant applications, however, have been for controlling brittle fracture and fatigue failure of metallic structures such as pressure vessels, airplanes, ships and pipe­ lines. Considerable development has occurred in the last twenty years in modifying Griffith's ideas or in proposing new concepts to account for the ductility typical of metals. As a result of these efforts, standard testing techniques have been available to obtain fracture parameters for metals, and design based on these parameters are included in relevant specifications. Many attempts have been made, in the last two decades or so, to apply the fracture mechanics concepts to cement, mortar, con­ crete and reinforced concrete. So far, these attempts have not led to a unique set of material parameters which can quantify the resistance of these cementitious composites to fracture. No standard testing methods and a generally accepted theoretical analysis are established for concrete as they are for metals.