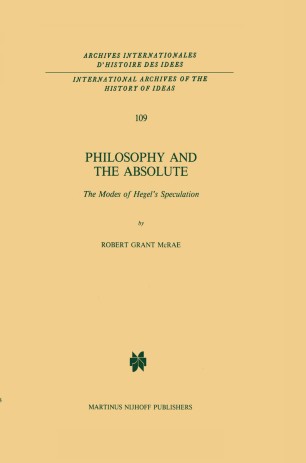 Philosophy and the Absolute

The Modes of Hegel’s Speculation

I have purposely limited myself to a rather brief statement in this introduc­ tion, in order that the summing up be not misrepresented for the discursive development of the whole. There is something more than mildly dangerous in setting oneself a series of goals in an introduction only to find them happily attained in the conclusion, as if getting from the beginning to the end was simply a question of transition. Of course, the destination of a speculative presentation includes the process of development in such a way that the end is always implicitly the beginning: each configuration simply forms a deter­ minate moment within the on-going manifestation of the "absolute". It is around Hegel's concept of the absolute, how it is known and how it presents itself, which the bulk of our discussion turns. We may say tentatively that the absolute speaks. This speaking is the manifestation of the absolute itself, not a dissimulation or mere appearance, and consequently can be known and known most perfectly in language. In Hegel's system, this speak­ ing or discourse has exhausted itself and is complete, but in what manner this "close" is achieved remains the question which disturbs and provokes our own speech in what is to come.