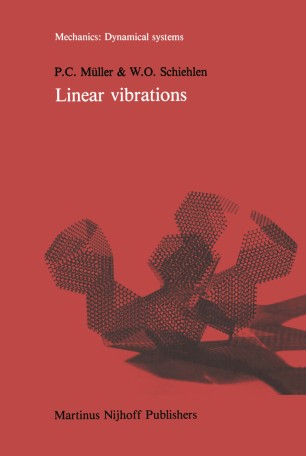 In the last decade the development in vibration analysis was char­ acterized by increasing demands on precision and by the growing use of electronic computers. At present, improvements in precision are obtained by a more accurate modelling of technical systems. Thus, for instance, a system with one degree of freedom is often not accepted, as it used to be, as a model for vibration analysis in mechanical engineering. As a rule, vehicles and machines have to be modelled as systems with many degrees of freedom such as multibody systems, finite element systems or con­ tinua. The mathematical description of multi-degree-of-freedom systems leads to matrix representations of the corresponding equations. These are then conveniently analyzed by means of electronic computers, that is, by the analog computer and especially by the digital machine. Hence there exists a mutually stimulating interaction between the growing require­ ments and the increasing computational facilities. The present book deals with linear vibration analysis of technical systems with many degrees of freedom in a form allowing the use of computers for finding solutions. Part I begins with the classification of vibrating systems. The main characteristics here are the kind of differential equation, the time depen­ dence of the coefficients and the attributes of the exciting process. Next it is shown by giving examples involving mechanical vibrating systems how to set up equations of motion and how to transform these into state equations.

`This excellently written and easily readable book is highly recommended to every scientist, engineer and student interested in vibration theory and its mathematical justification.'
Acta Scientiarum Mathematicarum
`The contents are well presented, and the introduction of topics not readily to be found in many textbooks on vibration makes this book a worthwhile addition to a dynamicist's library.'
The Aeronautical Journal, February 1986
`It is written in the form of a textbook useful for senior and graduate level students in mechanics or mechanical engineering. Practicing engineers faced with complex vibration problems will also find this book to be of value. The material is well organized into four parts.'
Applied Mechanics Review, 39:6 (1986)