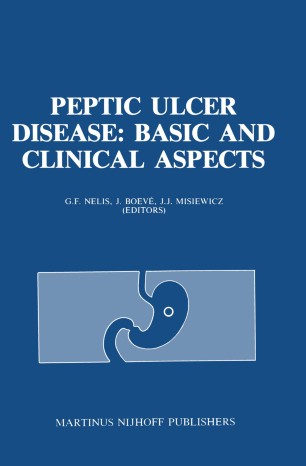 Proceedings of the Symposium Peptic Ulcer Today, 21–23 November 1984, at the Sophia Ziekenhuis, Zwolle, The Netherlands

Part of the Developments in Gastroenterology book series (DIGA, volume 7)

Despi te a slow decrease in the incidence of peptic ulcer in the Western world during the past decade, general practitioners, physicians, gastroenterologists, and surgeons deal with patients suffering from peptic ulcer and its complications almost daily. It has been estimated that some 10% of the population in the Western world becomes af­ flicted by peptic ulcer at least once and many of them have chronic relapsing disease. This lays a heavy burden on the amount of money which is spent in general health care. In recent years our understanding of peptic ulcer disease has in­ creased tremendously, but considerable gaps in our knowledge remain. Originally the increase in our knowledge has been stimulated by the development of fibre-optic endoscopy in the sixties, and later by the development of new surgical techniques and drugs in the seventies. New insights into the pathophysiology of the disease resulted from these developments and revived the scientific interest in peptic ulcer disease. However, the field remains complicated and the studies are be­ devilled by the large number of variables which can affect the results. In the symposium 'PEPTIC ULCER TODAY' we have attemp­ ted to bring together recent knowledge on basic and clinical aspects of peptic ulcer disease.