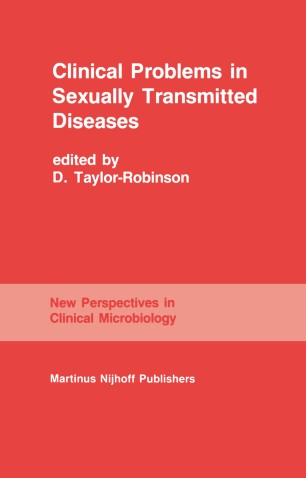 It goes almost without saying that there has been a marked increase in the incidence of sexually transmitted diseases throughout the world in the past two to three decades. Indeed, despite the progress that has been made in methods of diagnosis and treatment, the sexually transmitted diseases as a whole are the most common communicable diseases and as such constitute an important health problem. The increase in incidence may be accounted for by changes in sexual behaviour, the introduction of contraceptives and the increasing mobility of the population. In addition, during the same time period, the number of infectious agents recognized as being sexually transmitted has increased considerably. These include Chlamydia trachomatis, herpes simplex virus, cytomegalovirus and hepatitis B virus. Indeed, some are as dependent on sexual transmission as the agents which cause the traditional venereal diseases and collectively they cause morbidity which has out-stripped that caused by gonorrhoea and syphilis. It could almost be said that to know the sexually transmitted diseases is to know micro­ biology. However, the approach taken in this book has not been to consider individual infectious agents and evaluate what they do and do not cause but to consider clinical conditions and what might be responsible for them. To cover the complete spectrum of the sexually transmitted diseases in a comprehensive way now takes a text book of massive proportion.