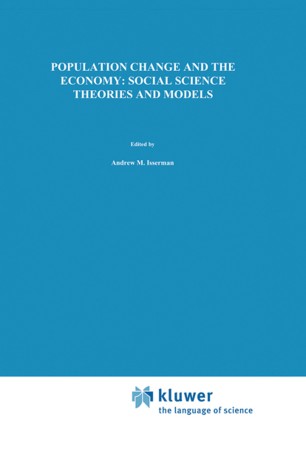 Population Change and the Economy: Social Science Theories and Models

Population change and population forecasts are receiving considerable attention from governmental planners and policy-makers, as well as from the private sector. Old patterns of population redistribution, industrial location, labor-force participation, household formation, and fertility are changing. The resulting uncertainty has increased interest in forecasting because mere extrapolations of past trends are proving inadequate. In the United States of America popUlation forecasts received even more attention after federal agencies began distributing funds for capital infrastructure to state and local governments on the basis of projected future populations. If the national government had based those funding decisions on locally prepared projections, the optimism of local officials would have resulted in billions of dollars worth of excess capacity in sewage treatment plants alone. Cabinet-level inquiries concluded that the U. S. Department of Commerce should (1) assume the responsibility for developing a single set of projections for use whenever future population was a consideration in federal spending decisions and (2) develop methods which incorporate both economic and demographic factors causing population change. Neither the projections prepared by economists at the Bureau of Economic Analysis nor those prepared by demographers at the Bureau of the Census were considered satisfactory because neither method adequately recognized the intertwined nature of demographic and economic change. Against this background, the American Statistical Association (ASA) and the U. S.