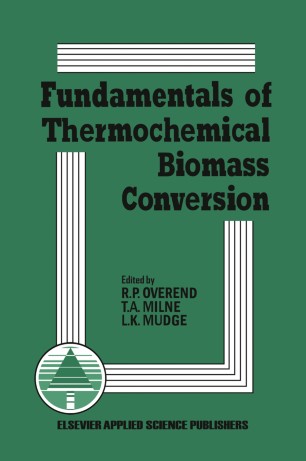 Throughout the world many projects have been underway to investigate the conversion of renewable biomass into energy and synthetic fuels by thermo­ chemical methods such as combustion, pyrolysis, gasification and lique­ faction. While many of these represent prior art used during the early 20th century, the recent decade since the 1970s oil shock has immeasurably increased the knowledge base for such processes. Much of the new knowledge has been gained by persons who were not trained in classical wood chemistry and there have not yet been many attempts to synthesize the knowledge into a corpus of systematic information. To bring this about the International Energy Agency's Forestry Energy collaboration, the Gas Research Institute, the National Research Council of Canada and the US Department of Energy jointly sponsored a conference on the Fundamentals of Thermochemical Biomass Conversion in Estes Park, Colorado which was held on October 18-22, 1982. The Conference, which was structured around invited plenary papers and contributions from researchers, served as the basis for the papers in this volume which reflect the substantial conclusions of the Conference. During the planning for the Conference, it was realized by the editors in their capacity as Co-chairmen that a major problem in biomass research was the lack of reproducibility between reported experiments and their inter­ comparison on account of the heterogeneity of biomass materials. A well­ known wood chemist, George M.