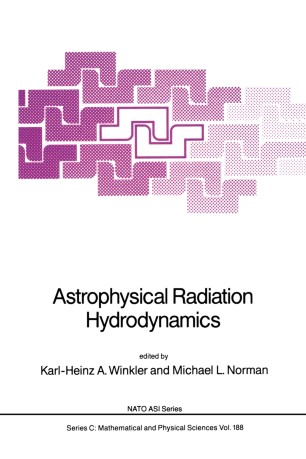 This NATO Advanced Research Workshop was devoted to the pre­ sentation, evaluation, and critical discussion of numerical methods in nonrelativistic and relativistic hydrodynamics, radia­ tive transfer, and radiation-coupled hydrodynamics. The unifying theme of the lectures was the successful application of these methods to challenging problems in astrophysics. The workshop was subdivided into 3 somewhat independent topics, each with their own subtheme. Under the heading radiation hydrodynamics were brought together context, theory, methodology, and application of radia­ tive transfer and radiation hydrodynamics in astrophysics. The intimate coupling between astronomy and radiation physics was underscored by examples from past and present research. Frame-dependence of both the equation of transfer (plus moments) and the underlying radiation quantities was discussed and clarified. Limiting regimes in radiation-coupled flow were identified and described; the dynamic diffusion regime received special emphasis. Numerical methods for continuum and line transfer equations in a given background were presented. Two examples of methods for computing dynamically coupled radia­ tion/matter fields were given. In l-d and assuming LTE the complete equations of radiation hydrodynamics can be solved with current computers. Such is not the case in 2- or 3-d, which were identified as target areas for research. The use of flux-limiters was vigorously discussed in this connection, and enlivened the meeting.