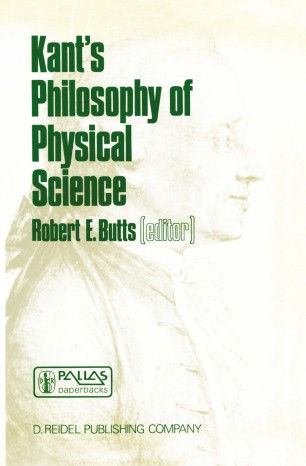 Part of the The Western Ontario Series in Philosophy of Science book series (WONS, volume 33)

The papers in this volume are offered in celebration of the 200th anni versary of the pub 1 i cat i on of Inmanue 1 Kant's The MetaphysicaL Foundations of NatupaL Science. All of the es­ says (including the Introduction) save two were written espe­ ci ally for thi s volume. Gernot Bohme' s paper is an amended and enlarged version of one originally read in the series of lectures and colloquia in philosophy of science offered by Boston University. My own paper is a revised and enlarged version (with an appendix containing completely new material) of one read at the biennial meeting of the Philosophy of Sci­ ence Association held in Chicago in 1984. Why is it important to devote this attention to Kant's last published work in the philosophy of physics? The excellent essays in the volume will answer the question. I will provide some schematic com­ ments designed to provide an image leading from the general question to its very specific answers. Kant is best known for hi s monumental Croitique of Pure Reason and for his writings in ethical theory. His "critical" philosophy requires an initial sharp division of knowledge into its theoretical and practical parts. Moral perfection of attempts to act out of duty is the aim of practical reason. The aim of theoretical reason is to know the truth about ma­ terial and spiritual nature.