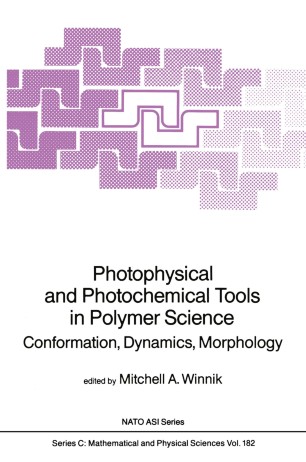 In 1980 the New York Academy of Sciences sponsored a three-day conference on luminescence in biological and synthetic macromolecules. After that meeting, Professor Frans DeSchryver and I began to discuss the possibility of organizing a different kind of meeting, with time for both informal and in-depth discussions, to examine certain aspects of the application of fluorescence and phosphorescence spectroscopy to polymers. Our ideas developed through discussions with many others, particularly Professor Lucien Monnerie. By 1983, when we submitted our proposal to NATO for an Advanced Study Institute, the area had grown enormous ly. It is interesting in retrospect to look back on the points which emerged from these discussions as the basis around which the scientific program would be organized and the speakers chosen. We decided early on to focus on applications of these methods to provide information about polymer molecules and polymer systems: The topics would all relate to the conformation and dynamics of macromolecules, or to the morphology of polymer-containing systems. Another important decision was to expand the scope of the ASI to include certain photochemical techniques, parti­ cular ly laser flash pho to lys is. These appl icat ions were at the time quite new, but full of promise as important sources of information about polymers.

`The volume is essential to researchers and institutions working in this well reviewed, broad field of science.'
Reaction Kinetics and Catalysis Letterds, Vol. 34, No. 2, 1987
Buy options