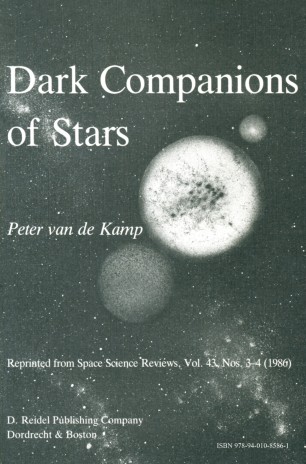 Astrometric Commentary on the Lower End of the Main Sequence

If you want to understand the invisible, look careful at the visible. The Talmud A 'bird's eye' or rather a distant spacecraft's view of the solar system reveals an assembly of planets, terrestrial, giant and Pluto. The orbital motions are in the same sense, counter clockwise, as seen from the north of the general flattened space within which the planetary motions are confined. This state of affairs is corevolving and, more or less, coplanar. The rotations are in the same sense as the revolutions, with the strikiiig exception of Uranus whose sense of rotation is perpendicular to its plane of revolution. As time goes by, most of the planets remain fairly close to a general plane and at no time stray unduly far from it; they remain confined within a rather narrow box or disk with a large 'equatorial' extent. The most distant planet, Pluto, requires a diameter of some 80 astronomical units for the disk. One astronomical unit is the distance of the Earth to the Sun, to be more precise the length of half the major axis of the Earth's slightly elliptical orbit around the Sun, and amounts to nearly 149600000 km.

`This book is extremely well conceived and written and will amply reward each interested reader.' Astronautical Society News Bulletin, August 1987