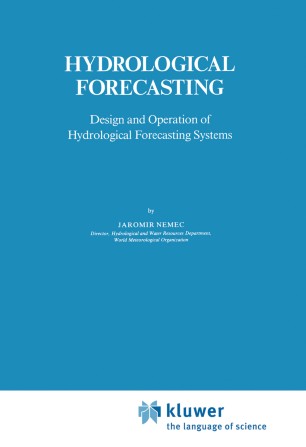 In the past two decades several activities in the field of water resources management have been enhanced and intensified. This . rise had at least two independent reasons. The first and main one was the constantly increasing water demand for agriculture and industry on one side and the concern about the deteriorating environment on the other. While this last concern was lately overshadowed by deterioration of national economies, the quantity of available water resources has certainly not increased with the growing scarcity of funds for its development and protection. Furthermore, the standard of living, which raised across the world, even in India and China, countries which concentrate more than a third of the world population, has made people and their governments more aware of natural disasters caused by weather. Since a large percentage of losses in human life and material damage from weather-related disasters are caused by water, either by its excess or scarcity, the concern about water has been increasingly associated with these disasters. The second reason for intensified water resources management is man's spectacular technological advance in electronics, computers and use of satellites. The Koran says that two things cannot be predicted: the sex of the child in its mother's womb and the quantity of water that falls from the sky and flows in rivers. Technological progress has disproved both of these caveats.