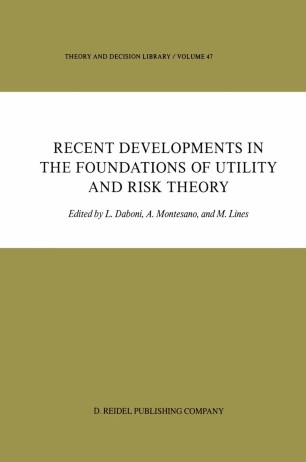 Recent Developments in the Foundations of Utility and Risk Theory

The Second International Conference on Foundations of Utility and Risk Theory was held in Venice, June 1984. This volume presents some of the papers delivered at FUR-84. (The First International Conference, FUR-82, was held in Oslo and some of the papers presented on that occasion were published by Reidel in the volume Foundations of Utility and Risk Theory with Applications, edited by Bernt P. Stigum and Fred Wenst~p). The theory of choice under uncertainty involves a vast range of controversial issues in many fields like economics, philosophy, psychology, mathematics and statistics. The idea of discussing these problems in international conferences has been successful: two conferences have been held and others will follow. The climate of the debate has changed in the meantime, partly as a result of these conferences. It is no more only a question of attacking or defending the neo-Bernoullian assumptions, but also of proposing wider generalizations and including new elements in the analysis of the decision process. For instance Amartya Sen - comparing the two current notions of rationality, internal consistency and self-interest pursuit introduces the concept of reasoning and considers the irrationality which may result from the failure of a positive correspondence between reasoning and choice or from a limited capacity of reasoning. Rationality is also considered with respect to the controversial axiom of strong independence. John C. Harsanyi introduces the concept of practical certainty, i. e.