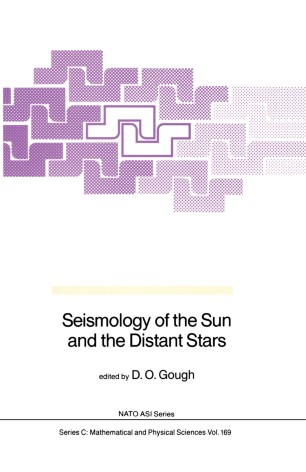 Seismology of the Sun and the Distant Stars

The history of modern helioseismology is only ten years old. In 1975 F-L Deubner separated for the first time the spatial and temporal pro­ perties of the solar five-minute oscillations, and was thus able to measure the dispersion relation for high-degree acoustic modes (p modes). The diagnostic value of these observations was appreciated immediately. Indeed, by comparing the observed relation with computations that had already been carried out by R.K. Ulrich, and subsequently by H. Ando and Y. Osaki, it was recognised that contemporary solar models that had been constructed with the low observed neutrino flux in mind were too hot in their outer layers. Moreover, their convection zones were too shallow. Since that time the observations have improved. There is now good reason to suppose that a sufficiently careful analysis will lead to a direct determination of the helium abundance in the solar convection zone, especially when foreseeable further improvements in the observations have been achieved. The data will also provide useful diagnostics of the uncertain equation of state of partially ionized plasmas, and they might also enable us to measure the large-scale structure of the convec­ tive flow.