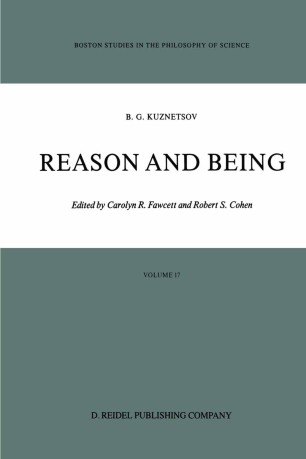 Part of the Boston Studies in the Philosophy of Science book series (BSPS, volume 17)

Boris Kuznetsov was a scientist among humanists, a philosopher among scientists, a historian for those who look to the future, an optimist in an age of sadness. He was steeped in classical European culture, from earliest times to the latest avant-garde, and he roamed through the ages, an inveterate time-traveller, chatting and arguing with Aristotle and Descartes, Heine and Dante, among many others. Kuznetsov was also, in his intelligent and thoughtful way, a Marxist scholar and a practical engineer, a patriotic Russian Jew of the first sixty years of the Soviet Union. Above all he meditated upon the revolutionary developments of the natural sciences, throughout history to be sure but particularly in his own time, the time of what he called 'non-classical science', and of his beloved and noblest hero, Albert Einstein. Kuznetsov was born in Dnepropetrovsk on October 5, 1903 (then Yekaterinoslav). By early years he had begun to teach, first in 1921 at an institute of mining engineering and then at other technological institutions. By 1933 he had received a scientific post within the Academy of Science of the U. S. S. R. , and then at the end of the Second World War he joined several colleagues at the new Institute of the History of Science and Technology. For more than 40 years he worked there until his death two years ago.