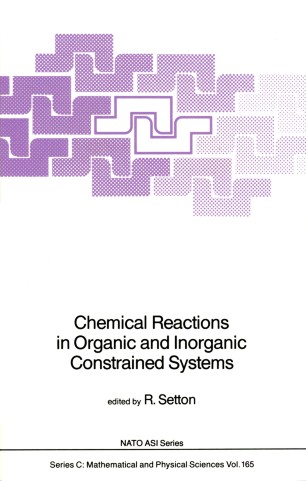 The basic idea of the NATO International Exchange Program for funding an Advanced Research Workshop on "Chemical Reactions in Organic and Inorganic Constrained Systems" was to contribute to a better under­ standing of the influence of configurational constraints on reaction mechanisms, as imposed on reagents by organic or inorganic templates. The original character of the Workshop was to bring together organic and inorganic chemists with this common interest in order to promote the exchange of ideas and, eventually, interdisciplinary research. All the participants to the Workshop agreed that the discussions were stimulating and fruitful. The judgement of the reader of the Proceedings may perhaps be more restrictive because the director (Professor J. J. FRIPIAT) and co-director (Professor P. SINAY), faced with the impossible task of covering such an enormous domain, were obliged to select, somewhat arbitrarily, a limited number of topics which seemed to them to be the most important. Their choice may be discussed and there surely are important gaps, with fields which were not considered. However, both organisers believe that, within the limited span of time and number of contributors, most of the exciting areas were addressed. Dr. WARNHEIM was kind enough to write a commentary on the Workshop; his summary, written with the hindsight of a few weeks, supports, we believe, this opinion. Dr. SETTON has accepted the burden of collecting and shaping (not selectively) the manuscripts. This book would not be what it is without his efficient contribution as scientific secretary of the Workshop.