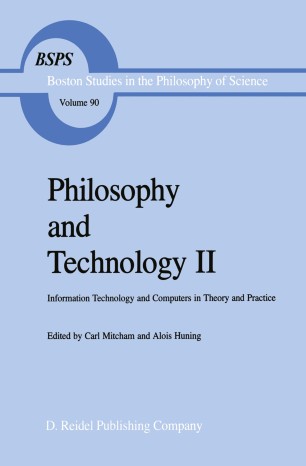 Information Technology and Computers in Theory and Practice

Part of the Boston Studies in the Philosophy of Science book series (BSPS, volume 90)

Until recently, the philosophy and history of science proceeded in a separate way from the philosophy and history of technology, and indeed with respect to both science and technology, philosophical and historical inquiries were also following their separate ways. Now we see in the past quarter-century how the philosophy of science has been profoundly in­ fluenced by historical studies of the sciences, and no longer concerned so single-mindedly with the analysis of theory and explanation, with the re­ lation between hypotheses and experimental observation. Now also we see the traditional historical studies of technology supplemented by phi­ losophical questions, and no longer so plainly focussed upon contexts of application, on invention and practical engineering, and on the mutually stimulating relations between technology and society. Further, alas, the neat division of intellectual labor, those clearly drawn distinctions be­ tween science and technology, between the theoretical and the applied, between discovery and justification, between internalist and externalist approaches . . . all, all have become muddled! Partly, this is due to internal revolutions within the philosophy and his­ tory of science (the first result being recognition of their mutual rele­ vance). Partly, however, this state of 'muddle' is due to external factors: science, at the least in the last half-century, has become so intimately connected with technology, and technological developments have cre­ ated so many new fields of scientific (and philosophical) inquiry that any critical reflection on scientific and technological endeavors must hence­ forth take their interaction into account.