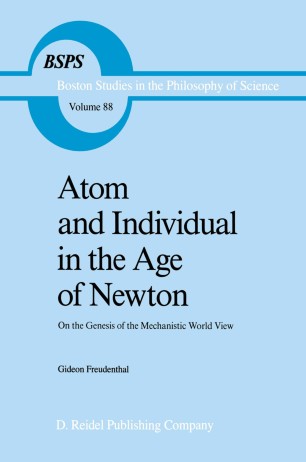 Atom and Individual in the Age of Newton

On the Genesis of the Mechanistic World View

Part of the Boston Studies in the Philosophy of Science book series (BSPS, volume 88)

In this stimulating investigation, Gideon Freudenthal has linked social history with the history of science by formulating an interesting proposal: that the supposed influence of social theory may be seen as actual through its co­ herence with the process of formation of physical concepts. The reinterpre­ tation of the development of science in the seventeenth century, now widely influential, receives at Freudenthal's hand its most persuasive statement, most significantly because of his attention to the theoretical form which is charac­ teristic. of classical Newtonian mechanics. He pursues the sources of the parallels that may be noted between that mechanics and the dominant philosophical systems and social theories of the time; and in a fascinating development Freudenthal shows how a quite precise method - as he descriptively labels it, the 'analytic-synthetic method' - which underlay the Newtonian form of theoretical argument, was due to certain interpretive premisses concerning particle mechanics. If he is right, these depend upon a particular stage of con­ ceptual achievement in the theories of both society and nature; further, that the conceptual was generalized philosophically; but, strikingly, Freudenthal shows that this concept-formation itself was linked to the specific social relations of the times of Newton and Hobbes.