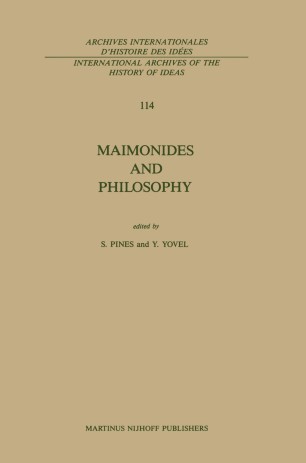 Papers Presented at the Sixth Jerusalem Philosophical Encounter, May 1985

In the year 1985, presumed to mark the 850th anniversary of Maimonides' birth, the Sixth Jerusalem Philosophical Encounter was dedicated to Maim­ onides as philosopher. We did not enter into the other aspects of his work, rabbinical, legal, medical, etc., except in so far as the relation between his philosophy and his work in halakha (Jewish law) is itself a philosophical question. That no one is quite certain about Maimonides' date of birth is symbolic of the state of his philosophy as well. Maimonides' thought poses various enigmas, lends itself to contradictory interpretations and gives rise today, as it did in the Middle Ages, to sustained controversies. Some of the contribu­ tions to the present volume deal with these and cognate topics. Others deal with certain aspects of the philosophical tradition in which Maimonides was rooted, with some traits peculiar to the Islamic society in the midst of which he lived, and with his influence on Christian scholasticism. Maimonides' thought had many facets, and for this and other reasons the question as to his place and stature in the history of philosophy admits of no simple answer. In this volume an attempt has been made to draw atten­ tion to some of these complexities.