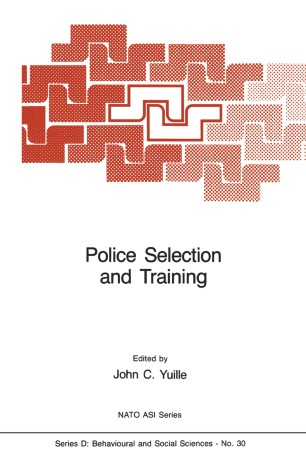 The Role of Psychology

The New Police Officer During the past twenty years the tasks required of police officers have expanded and changed with dramatic rapidi ty. The tradi tional roles of the police had been those of law enforcement and the maintenance of public order. As a consequence police officers were typically large-bodied males, selected for their physical abilities and trained to accept orders and enforce the law. Over the past two decades, however, the industrialized nations have placed a variety of new demands on police officers. To traditional law enforcement and public order tasks have been added social work, mental health duties, and cORllluni ty relations work. For example, domestic disputes, violence between husbands and wives, lovers, relatives, etc. , have increased in frequency and severity (or at least there has been a dramatic increase in reporting the occurence of domestic violence). Our societies have no formal system to deal with domestic disputes and the responsibility to do so, in most countries, has fallen to the police. In fact, in some areas as many as 607. of calls for service to the police are related to domestic disputes (see the chapter in this text by Dutton). As a result the police officer has had to become a skilled social worker, able to intervene with sensi ti vi ty in domestic situations. Alternatively, in the case of West Germany, the officer has had to learn to work co-operatively with social workers (see the chapter by Steinhilper).