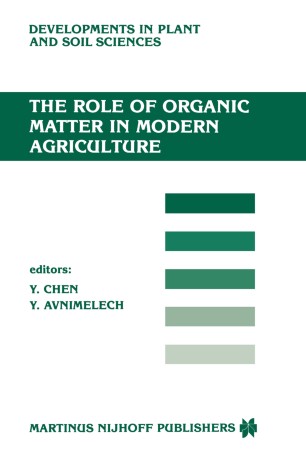 The Role of Organic Matter in Modern Agriculture

Part of the Developments in Plant and Soil Sciences book series (DPSS, volume 25)

The use of organic residues as a means of maintaining and increasing soil fertility is of long-standing. This tradition has been somewhat neglected since the introduc­ tion of mineral fertilizers at low cost. More and more farmers and scientists are now showing renewed interest in the proper and effective use of org~tnic residues, composts and other recycled organic additives. The role and function of organic amendments in modern agricultural systems have become topics of major interest in the scientific and agricultural communities. Research work on residue disposal has provided new concepts on the interaction between organic components and soils as well as new handling technologies (e. g. pelletizing of organic residues). The trend to conserve energy has led scientists to study the minimal tillage system, to find ways of replacing conventional inorganic fertilizers with natural organic prod­ ucts or microbial preparations, and to develop new composting methods. The drive to achieve higher yields in commercial greenhouse farming has led to a search for optimum substrates as growth media and for improved management techniques. This has led to the introduction of organic substitutes for peat, nota­ bly those originating from agricultural wastes. Another important aspect is the current interest in organic farming, where use of synthetic chemicals is avoided or prohibited. An increasing percentage of the population in highly developed countries is willing to pay premium prices for food produced on soils where inorganic fertilizers and other agricultural chemicals have not been used.