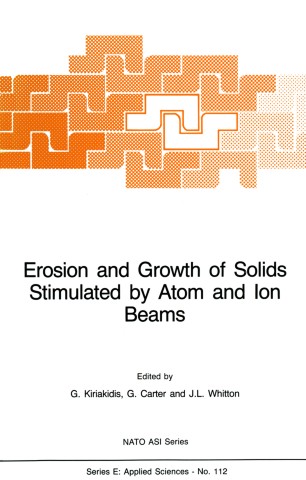 Erosion and Growth of Solids Stimulated by Atom and Ion Beams

The members of the organising Committee and their colleagues have, for many years been investigating the evol­ ution of the fas'cinating surface features which develop during sputtering erosion of solids. Such experimental, theoretical and computational studies have also been carried out in many international laboratories and, as well as much cow~onality and agreement, substantial disagreements were unresolved. In view of the increasing importance of such processes in technological applications such as microlitho­ graphic etching for the patterning of solid state devices and in fusion technology it was felt opportune to hold a meeting in this area. Furthermore the use of energetic atomic and ion fluxes is also becoming of increasing importance in assisting or modifying the growth of thin films in a number of important industrial processes and it was therefore rational to combine the, study of both erosional and growth processes in a single meeting. These proceedings include 16 invited review and 15 oral or poster presented contributions to the NATO Advanced Study Institute on the "Erosion and Growth of Solids Stimulated by Atom and Ion Beams". The review contributions span the range from the fundamental concepts of ballistic sputtering, and how this influences surface morphology evolution, through processes involving entrapment of incident species to mechanisms involved in'the use of chemically reactive ion species. Further reviews outline the influence of energetic irradiation upon surface growth by atomic deposition whilst others discuss technologkal applications of both areas of growth and erosion.