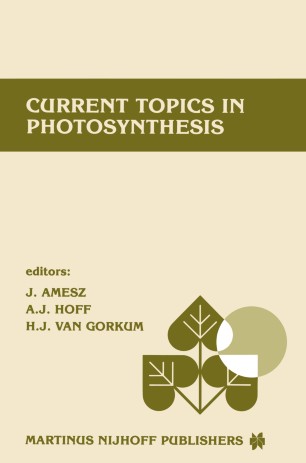 Dedicated to Professor L.N.M. Duysens on the occasion of his retirement

Four decades ago, when Lou Duysens was about to start his work on fluo­ rescence and energy transfer in photosynthesis that would lead to his thesis [1], very little was known about the molecular mechanisms of photosyn­ thesis, certainly from our present-day point of view. However, this state of affairs would rapidly change in the ensuing years by the introduction of modern physical and biochemical techniques. Especially the field of optical spectroscopy, on which the work of Duysens had such a significant impact, has proved to be one of the most fruitful techniques in the study of primary processes and electron transfer reactions in photosynthesis. Duysens' thesis established the role of energy transfer in photosynthesis and also showed for the first time the existence in photosynthetic bacteria of light-induced absorbance changes of what is now known as the primary electron donor P-870. Subsequent studies by the same method demonstrated the photo-oxidation of cytochromes, both in bacteria [2] and in algae [3,4] and of the absorbance changes [3] that were later found to be due to electro chromic band shifts of antenna pigments. Measurements of cyto­ chrome kinetics in light of various wavelengths led to the concept of two photosystems in green plant photosynthesis [5], whereas a study of the factors affecting the fluorescence yield of chlorophyll gave the first infor­ mation on the electron acceptor Q of photo system II [6].