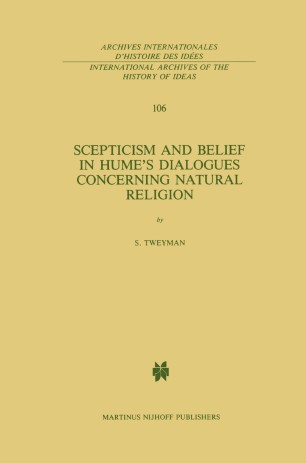 In the pages that follow, an attempt is made to examine those sections of the Dialogues Concerning Natural Religion which deal with the Argument from Design - the argument which purports to prove that certain observed similarities between the design of the world and machines of human contrivance countenance reasoning by analogy to the conclusion that the cause of the design of the world resembles human intelligence. The sections which deal with the Argument from Design, and with which I am therefore concerned, are Parts I through VIII and Part XII. I argue that a clue to Hume's discussion of the Argument from Design is to be found in Section XII of the first Enquiry, in which Hume presents his most thorough analysis of philosophic dogmatism and scepticism. The Dialogues, as will be shown, follows precisely Hume's recommendations in this Section for bringing the dogmatist to the position which Hume himself endorses - 'mitigated scepticism. ' It is, then, the position of the mitigated sceptic which is elaborated in Part XII of the Dialogues. The belief in an intelligent designer of the world is shown to be akin to certain other beliefs discussed by Hume - causality, physical objects, a continuing self - which are usually referred to in the literature as 'natural beliefs. ' The mitigated sceptic's defense of the unknowability of the divine nature is seen to be in accordance with Hume's view that whatever is believed naturally cannot be known or understood.