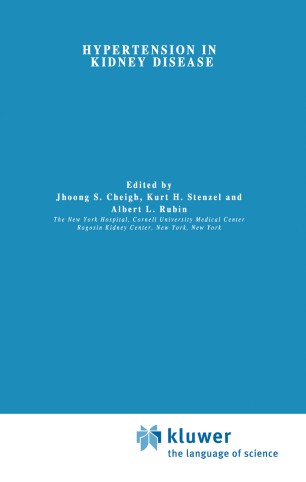 Part of the Developments in Nephrology book series (DINE, volume 14)

Blood pressure control is central to all bodily functions. There are many points in the multifaceted cybernetic system wherein hypertension may be produced. Hypertension is a 'young' disorder whose existence has been known for less than a century. It is not only extremely prevalent among every popula­ tion, but also deleterious to the health of mankind. The more we understand about hypertension's harmful effects, the more urgent is the need for its effective control. The kidney is the central organ that controls vascular tone and body fluid volume; these two factors are dominant in determining arterial blood pres­ sure. Hence, it is not surprising to find in hypertensive disorders that there are abnormalities in the kidneys, functional or anatomical, subtle or overt, that cause or are the consequence of hypertension. The first suggestion that the kidney could cause hypertension was made in 1836, before arterial pressure could even be measured, by Richard Bright. He observed that cardiac hypertrophy was often present in patients who died of renal disease. It was, however, Goldblatt and his colleagues in 1934 who opened the modern era of experimental and clinical research in renal hypertension. Since then, although far from complete, enthusiastic and intensive research efforts have greatly improved our understanding of the nature of renal hypertension.