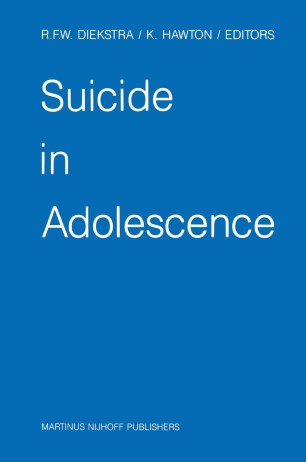 The official death rates from suicide vary considerably between countries in the world for which data are available. They range from 3 to 45 persons a year, per 100,000 of population. Historically, the higher rates of suicide are in the older age groups and in males. However, the general trend in the last twenty years has been for suicide increasing in the younger age groups (15-34) and in femah;s. It has been suggested that thi~ development is related to the phenomenon of attempted suicide, of which the rates in most industrialized countries have doubled and in some countries even tripled over the past two decades. The average rate of attempted suicide is now estimated to be around 200 per 100,000 for males and 350 for females. Almost two-thirds of these occur before the age of thirty. Although the majority of attempted suicide are not intended to be lethal, once a suicide attempt has been made, there is more likelihood of subsequent death by suicide. As many as ten percent of people who have made a previous unsuccessful attempt commit suicide at a later stage in their lives. rersons with increased likelihood to commit suicide are youngsters from disrupted families and from families with a history of suicide, drug and alcohol addiction, those who have failed at school, the unemployed and those suffering from depression.