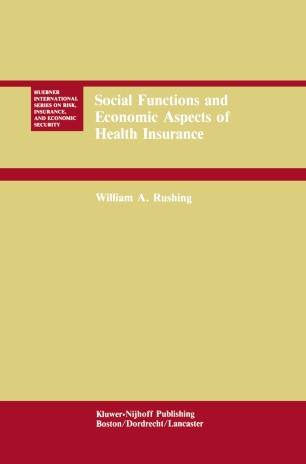 Statistics published by the U. S. Department of Commerce (1980) indicate that in 1977 we spent 8. 1% of our gross national product (GNP) on life, health, property-casualty, and other forms of insurance. An additional 5. 7% was used to pay the Social Security tax, which is another form of insurance premium, for a total of 14. 8% of the GNP. \ Although insurance had its historical origin in marine insurance, it has now developed into one of the major industries of the American economy and extends into many areas of economic activity. One area where growth has been particularly strong is the medical sector. Health insurance is a major institution in all industrialized countries. It became a government responsibility in 1883 when Bismarck intro­ duced a compulsory program of health insurance for industrial workers in Germany. Programs for workers in various industrial and income categories soon followed in other European countries-Austria (1888), Hungary (1891), Norway (1909), Servia (1910), Great Britain (1911), and Russia and Romania (1912) (Rubinow, 1913:250). Programs in these countries were extended in subsequent years, and other countries in Europe followed with their own programs. Consequently, today most industrial countries have universal or near-universal health insurance coverage. In the United States the issue of national health insurance has been seriously debated since just prior to World War I, and polling data since the 1930s show that a substantial majority of the public has been supportive of such a program (Erskine, 1975).