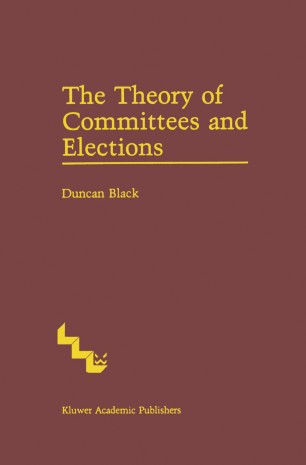 The Theory of Committees and Elections

THIS book or some related work has occupied me spasmodically over rather a long period, in fact ever since I listened to the class lectures of Professor A. K. White on the possibility of forming a pure science of Politics. Mter an earlier version of Part I had failed to obtain publication in 1947, some chapters appeared as articles, and I am obliged to the editors of the journals mentioned below for permission to reprint this material, sometimes in a modified form. When I first attempted publication I was unacquainted with the earlier history of the theory, and, indeed, did not even know that it had a history; and the later additions to the book have largely been by way of writing the present Part II. This historical section does not include the important recent work, Social Ohoice and Individual Values (1951), of Professor Kenneth J. Arrow; but it does include all the mathematical work on committees and elections appearing before the middle of this century which has come to my notice, although the last item in it is dated 1907. No doubt there is much important material which I have failed to see. The theorizing of the book grew out of a reading of the English political philosophers and of the Italian writers on Public Finance. At a very early stage I was helped to find the general lines of development by discussion with my colleague Professor Ronald H.